Creativity Is A Course of | Branding Technique Insider

So the Tokyo Olympics are very soon and there are numerous questions about the safety of the athletes, the lack of fans and whether it should take place at all.

But back in 2015, the Tokyo Olympics were in hot water for completely different reasons – the logo.

A lot has happened since 2015 (small understatement), but it’s worth looking back on the theme with the original logo designed by Kenjiro Sano. With an obvious wealth of well-known clients, Sano and his studio seemed a good fit with the Games branded designers.

After the logo was introduced, the Belgian designer Olivier Debie accused the designer of plagiarism. Debie accused Sano of copying his symbol, which he had previously created for the Théâtre de Liège in 2013. Sano vigorously denied the claims at the time – although the similarities between the logos cannot be denied.

Unfortunately, it was all in vain for Sano as the Olympic Committee withstood international pressure and gave up branding work. Although Debie pulled out of the lawsuit for financial reasons, the game organizers (and Sano) agreed to stop branding. 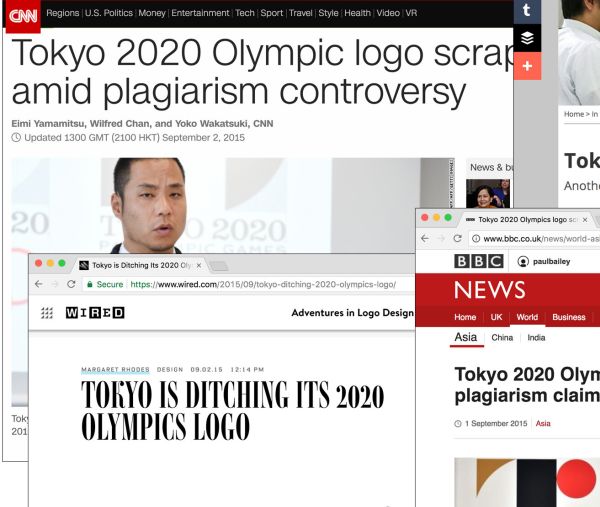 Of course, there has been a new logo and branding for the Tokyo Olympics for many years, and that’s perfectly fine in and of itself. But the allegation of copying and the resulting damage to its reputation is difficult to dispel (although it appears that Sano and his studio continued to act beyond that incident in 2015).

The problem is that while the two logos were of course very similar, it’s entirely conceivable that the ways in which they were created were unique. You can fully see where any designer would draw references from to accomplish their final design. In Debie’s case, the theater’s initials. In Sano’s case, the initial of Tokyo and the Japanese flag.

The problem is that we judge originality by the ultimate ‘thing’ that is created. In some cases, this is also legally protected. However, in order to judge whether something is original, we should really judge the creative process by which that thing was created.

Creativity is a process. In an ideal world, we would judge the originality of a process and not a final “thing”.

Of course, there are problems with logos not being allowed to be too similar, but it is a very weak argument to suggest that the original Tokyo Olympics logo could have had a negative impact on a theater’s business in Belgium. However, the design community can spread allegations of plagiarism very quickly without realizing the consequences they can have.

If the creative process were more visible, transparent, and validated, then perhaps those creating something new can be measured by the originality of a unique process – rather than a unique “thing”.

Regardless of the history of branding, we definitely have the Olympics ahead of us. One who will be like no other. We can only hope that the competitors stay safe and return to their home countries safely.

More about the story from 2015 in: Design Week | Japan times | Dezeen

The Blake Project helps brands, at all stages of development, focus on those who matter most in the branding workshop

FREE Publications and Resources for Marketers